Thanks to my blog on Urban Exploration I've gotten a lot of email regarding my reference to Witley Park. So this week I'm going to take a little detour from writing to let you all in on one of Great Britain's best kept secrets.  Look closely at this picture: 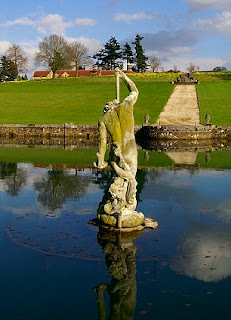 What do you see there? Looks like a lake with a statue doesn't it? Believe it or not, you're looking at a ballroom - the statue sits dead center of the domed window ceiling that lets light in through the water above.
Witley Park is considered a vulgar piece of British history.  It's one of those "hush-hush" things that lends itself to gossip but is met with a blank stare when queried about.  To quote British journalist Harry Blount, “The tale behind it involves not just a staggeringly ambitious, wildly over-the-top folly, but also a tragic Victorian morality story of speculation, corruption, disgrace and suicide.”


British born Francis Whitaker Wright came to America in 1867 and built not one but several fortunes while investing in silver mines.  As fast as he made the cash though, he lost it and when he did have money his investors rarely, if ever, made a penny.
Realizing that the great American west held limited prospects to continue to swindle, Mr. Wright headed back east where he became the chairman of the Philadelphia Mining Exchange and a member of the New York Stock Exchange. This allowed him more opportunities to defraud countless people.
To make a long story short, sooner or later he did manage to outstay his welcome in America and returned to England.  By 1896 Wright had swindled literally millions of pounds from his investors by promoting himself as an expert regarding mining.  That money was funneled into Witley Park which Wright purchased from the Earl of Derby.
While there were yachts and fancy townhomes, as well as expensive jewelry and clothing for not only his wife but Wright himself, Wright’s crown jewel was the mammoth estate - which he gutted and proceeded to completely overhaul.

In the end the manor would sport sixteen bedrooms, twelve water-closets, three kitchens, three libraries, several profesisonal parlors, a velodrome (an arena with a banked track for cycle racing), a theatre and observatory, a private hospital, a fifty horse stable and an underwater ballroom complex complete with a billiards room, a party room and a swimming pool that may or may not have included a fountain.
﻿
Publicly referred to as “gorgeous vulgarity” and a “magnificent burlesque of business” the estate brought in the crème de le crème of British society – including members of Queen Victoria’s court.
The underwater ballroom hosted many parties and its adjoining billiard room was frequented even more often as Wright loved to play in the ambient light the skylights offered.

By 1900 Wright had pulled one too many cons.  As with most Ponzi schemes, his frauds began to come to light.  In 1903 Wright fled the country, leaving his estate to sit as he was pursued, extradited and forced to face trial.  Upon being found guilty, Wright promptly smoked a cigar and went to the loo where he took cyanide and died sitting on, of all places, the toilet.
Today Witley Park has been split and divided numerous times.  The main house was destroyed in a fire while its remaining buildings were turned into a conference center.


The lake and its ballroom are privately owned by an entrepreneur who, every so often, will allow an explorer down below the depths to investigate what was once a grand and regal monument to the gilded age.


Wright’s Folly, as Witley Park is known amidst the locals, is a piece of British history that is not well known but is truly fascinating and thought provoking nonetheless.
Ever since I found out about it I have  loved the Witley Park ballroom. I think the concept is fascinating and would love to use it in a book. I just haven’t come up with the right story yet. If I don’t, I hope somebody else does.  The ballroom is a testament to ingenuity if nothing else.
Well over 100 years old at this point, the expanse of tunnels and rooms remains almost completely dry. There has only been one recorded flooding of the complex and that was in 2011 due to extended rainstorms. The drainage system installed within the complex's walls and floors had the entire underground area dried out within two weeks.
Also the use of skylights to light the entire complex, along with the tunnels to and from each room, are amazing examples of architecture.
The expertise with which the entire complex was built tells us that Wright hired the best to do the work. I have a feeling that if it had been Wright himself who had actually built any of this it would have collapsed long ago.
So there you have it - Witley Park.  If I ever make it to England? This is on my list of must see locations!