After taking a week off to guest blog over on the lovely Cindy Carroll's blog I have returned to fill your head with useless yet somewhat interesting knowledge that may or may not come in handy sooner or later! Last night I got into a discussion with a friend regarding my other passion in life aside from writing – Urban Exploration.  If I were twenty years younger and a lot lighter? There might be no Mia Fisher books on the market at all!  (*gasp*) 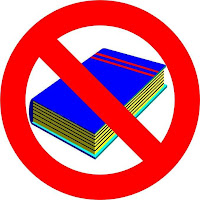 For those who don’t know, Urban Exploration is the fascinating art of exploring and photographing abandoned buildings, usually hospitals but over the past decade it’s advanced to factories, mills, churches, even houses, hotels and apartment buildings.  Bear in mind that most of the time this is, most definitely, illegal. 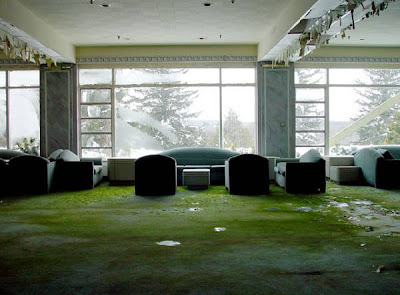 The Pines Hotel, (c) 2003, Tom Kirsch
It’s rare that UE people go asking for permission – basically because sometimes it’s too hard or time consuming to track the owners down, sometimes it’s because they already know the answer would be no due to insurance liability or just plain old crabbiness of the owner. But, sometimes, someone such as Jeremy Barnard (www.jeremybarnard.com) or Tom Kirsch (www.opacity.us), both exceptional photographers, will get permission to take pictures in order to produce a series or to document the building’s history. 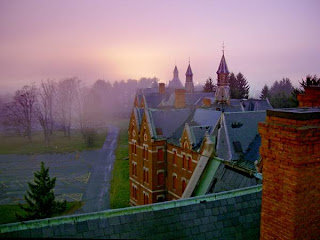 
It is also important to keep in mind that the purpose of a true UE person is not to deface the property or take from it in anyway.  Their motto is to take nothing, leave nothing behind.  In other words, don't make a mess, don't leave a mess, walk in, take pictures, and then leave.  Their purpose is to document the location, to appreciate the beauty of its architecture and to mull its past.  This is especially true with mental hospitals, especially Kirkbrides.  Kirkbrides are what got me interested in UE in the first place. 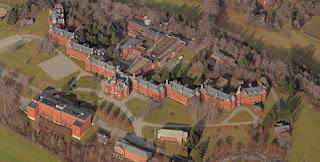 Thomas Kirkbride was a founding member of the Association of Medical Superintendents of American Institutions for the Insane (AMSAII) —the forerunner of the American Psychiatric Association.  He sought to bring the mentally ill into a calmer and more natural setting than the squalid warehouses the cities of the 19th Century offered.  His building plans were based on the precepts of Moral Treatment, promoting more open floor plans and access to the outside under supervision. 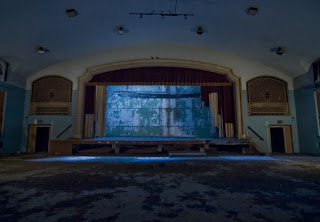 
When first constructed these buildings were state of the art and breathtaking in their complex simplicity. But, over time, they pretty much became the places they were built to replace – warehouses for humans that society didn’t want to have to deal with.  The political debauchery of health departments aside, in the end these buildings were closed out due to former President Ronald Reagan’s mental health initiatives leaving most of these monoliths to sit in silence and rot beneath the sun. 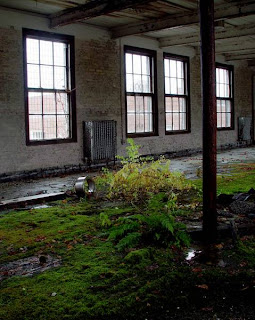 That said, my love of Kirkbrides started at a young age – I had a relative that worked in one of those buildings.  When we’d go to visit we’d go to pick her up after work. I can remember seeing that huge gothic  building – which to a six or seven year old was absolutely ginormous (to quote a kid).  It wasn’t until I was much older that I realized just how truly gigantic the building really was.  One time security let us in to wait, it was the administration building, far removed from patients, and it being after hours, it was deathly quiet. I can remember how it looked – I can also remember being scared to death of the staircase that led up to the second level.  I had no clue what the building was or what went on there at that age but I knew something bad was up those stairs, even with all the lights on I had the creeps. 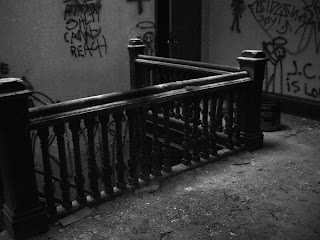 Years later I learned that I wasn’t the only one to have a weird experience at that hospital – or any other monolithic Kirkbride for that matter.  In my opinion most hospitals of any sort are haunted (as are nursing homes).  But, yet, my curiosity of the paranormal didn’t determine my love of UE either – it was the history.  If only the walls could talk… Lives lived and lost, entire sets of people abandoned and left to die, people abused in the name of medicine, children prisoners in their own bodies left in the care of strangers, some cruel, some kind.  Many of these buildings were left as is for the vandals – over the years kids, drunks, druggies and professional taggers infiltrated these living pieces of history to steal and destroy.  This is where the brave UE people come in – they dare to break the law in order to see that these pieces of history are documented before they are gone. 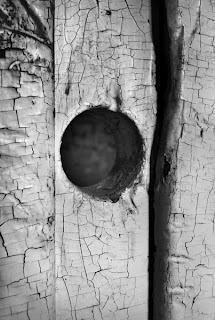 The building where my relative had her office is now gone, it was demolished to make way for condos that, in my opinion, are probably extremely haunted.  Preservation groups attempted to save that particular building but ultimately lost in the end.  Even as we speak, Kings Park Psychiatric on Long Island, which, while not a Kirkbride, was one of the largest mental health complexes in this country, is being dismantled piece by piece to make way for more development.  Thankfully a group of UE photographers made sure to document every area they could get into before the end. 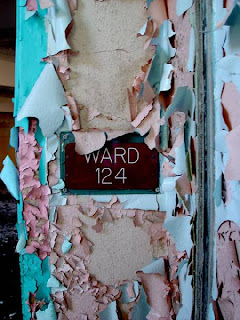 Somebody once asked me, so what the heck do we the public get from a bunch of pics taken by a bunch of trespassers?  It was a simple answer:  you get history. You get a picture of how these places operated, how their patients lived, how they attempted to function day after day.  And those are just the hospitals…someday I’ll tell ya’ll about Whitely Park, that’s a UE story that’s totally cool, yet totally weird… 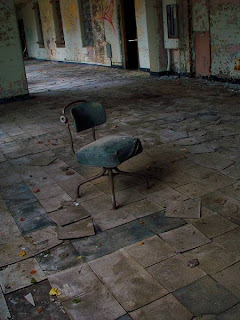 Anyway, Urban Exploration is about documenting history in the present. It’s about saving what we can to show people how things were in order to pave the way for how it should be if we ever have to go this route again.  Man is destined to make the same mistakes again and again if he doesn’t learn from those mistakes.  UE in abandoned mental hospitals allow for those mistakes to be seen and understood. 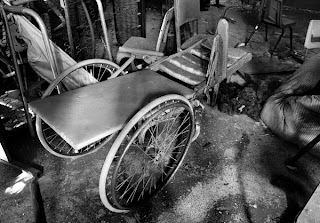 My book, Ethereal Ecstasy, which was recently contracted by Black Velvet Seductions, is set in an abandoned mental hospital.  The book itself isn’t about UE, but it uses the fictional Barrister Hills Hospital as a serial killer’s dumping ground which, when you think about it, miles of empty building?  Piles of rusted bed frames and rotted mattresses? Steam tunnels often times filled with stagnant water and/or toxic run off? Padded solitary rooms where, perhaps, somebody forgot to remove the lock?  You have the perfect location where nobody can hear you scream… 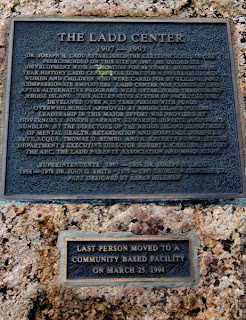 I took what I knew regarding abandoned mental hospitals to create Barrister Hills.  There’s just something thought provoking and intriguing about those large hallways lined with wheelchairs and broken toys, rotten curtains hanging in barred windows where the glass was long ago shattered…a clock hanging by one thin wire that stopped at 3:15 who knows how long ago?  What have those walls seen? What did they hear? Is all this stuff that was left behind truly alone? Literally hundreds of people died within the walls of any given mental institution in this country – who is to say some of them aren’t trapped there locked within the walls in death as they were in life? 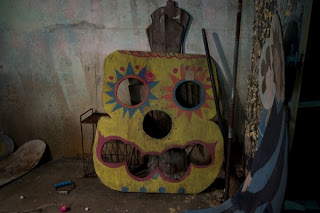 
I know that Urban Exploration is not everybody’s thing, but for me it lends itself naturally to writing – these locations can be structural time capsules where virtually any scenario could be set up.  They can also be re-created as anything a writer wants them to be – a gothic or regency castle, a mad scientist’s abode, a super villain’s hideout.  Abandoned buildings offer writers an already designed landscape with which to work while they provide non-writers with living pieces of history - history that is slowly being demolished even as I type.  It is to society’s benefit that UE enthusiasts do what they do and it remains in society’s best interest to learn about these locations, to see what was there, to understand the history behind them and how they came to be in the state they’re in now. 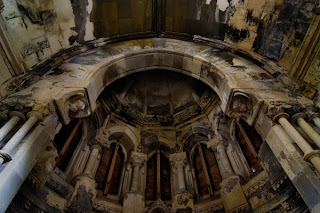 Now, I’m not telling everybody to run right out and break and enter, not in the least. What I am saying, though, is to consider an abandoned building the next time you see one.  Take in its architecture, its design, maybe you’ll find something there that could interest you enough to research its history a little – if not, move on but don’t forget to try it again next time.  Sometimes the small and fascinating things in life are to be found in very large and empty places. 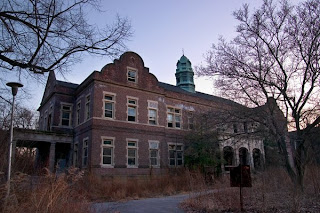